For the first year, Maximum Exposure will occupy The Gladstone Hotel's third and fourth floors for the entire month of April. Outliers presents the photography of six emerging artists as selected by a distinguished panel of industry representatives. The Outliers exhibition offers an in-depth view into a body of work from these distinguished artists and acts as a precursor to the work exhibited in Fourth Year Thesis Show on the second floor at the Gladstone, opening April 27th.
Outliers will display work by Chris Dale, Elaine Chan-Dow, Monica Emme, Gio Foschino, Fraser McCallum, and Marisa Tratnik. Outliers was curated by Alice Dixon, Exhibition Coordinator of Gallery 44, and Persilia Caton, Artistic Project Manager of Scotiabank Contact Photography Festival.
Where: Gladstone Hotel, 3rd & 4th Floors, 1214 Queen St W., Toronto
When: April 3rd - April 29th, 2012, Opening Reception Friday April 27th, 7-10pm
Posted by XPACE Cultural Centre at 06:52 No comments:

Xpace hosted FEAST 04 this past weekend where guests gathered to hear out artist proposals for micro-funding while dining on some fantastic vegetarian food. Zach Pearl won the vote to develop his website Wrecking Ball TO. For the student grant, Melissa Luk took the prize to develop her comics newspaper.

FEAST 05 will be taking place on Sunday July 29, 2012, 6pm, @ Xpace Cultural Centre. If you are interested in attending the next FEAST, tickets will be available in July. Join FEAST's mailing list on www.feast-toronto.com, or email info@feast-toronto.com.

Check out a column written by Grid Toronto about the latest FEAST event by clicking here.

Here are some photos from the event:

Read more »
Posted by XPACE Cultural Centre at 18:49 No comments:

XPACE held a do-it-yourself terrarium and sand-art workshop this past month. Check-check-check it out... 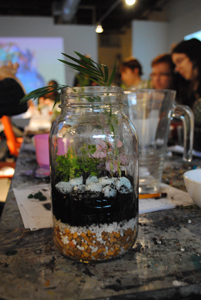 Read more »
Posted by XPACE Cultural Centre at 12:57 No comments:

XPACE.info is currently undergoing maintenance for archiving and updates. We do apologize for any inconvenience caused. But please keep checking back for more info right here or visit our Facebook group too!

Email ThisBlogThis!Share to TwitterShare to FacebookShare to Pinterest
Labels: Press 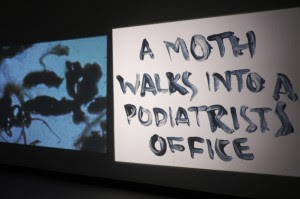 Yesterday's Today, Tomorrow investigates impermanence and the recontextualization of art and history through digital media. The artists in this exhibition reference historical means of representation and delineate contemporary modes of interpretation in the information age. Each artist emphasizes the presence of historical documents and/or methodologies in art and culture through appropriation and process-based initiatives. The execution and representation of these subjects are unified by their ephemerality, exhibited through the contingent ambiguities of their content, physical properties, and separation from their historical context. Impermanence is perpetuated by technological developments in production as well as the various devices mediating such experiences. Yesterday's Today, Tomorrowis both transient and contingent - a precarious affiliation with both yesterday and tomorrow. 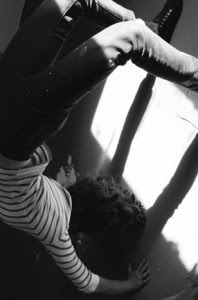 Using constructed and found images, Belerique aims to disclose and reveal photography’s ability to transform through work based on light and illusion.  She employs photographic tropes highlighting its construction and materiality over subject.  Her interest is primarily in the experience of a shifting perspective in the search for possible meanings. In the work 10 Second Objects Belerique bends over backwards to bridge the gap between ‘being’ and ‘performing’.

XBASE / Bending Over Backwards and Flogging A Dead Horse 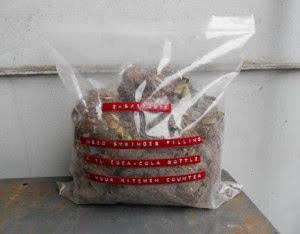 Over a period of two years Hannah Enkel has collected various items and observations while working as a house cleaner.  Taken from the vacuum bags of the houses Hannah Enkel cleans at, this project is a collection of those contents. Enkel has created an archive: contained, dated and labelled with descriptive observations of situations involving the stranger’s belongings seen at these houses. Cleaning houses has given her the opportunity to  inhabit stranger’s intimate spaces and form opinions about them from the things that they own, as well as their (often strange) habits. Collecting both observations and debris that is obviously unwanted; (fallen food, dust, hair etc.) and placing them in the same container, highlights Enkel’s seemingly invisible role within private spaces that have been made public through her presence.

then gallery is proud to present the first solo exhibition of Toronto based sculptor Georgia Dickie. Making direct reference to the proximity of her studio to the gallery's location, six hundred and seventy eight feet is an installation created through performance. Dickie will orchestrate a team to arrange and assemble combinations and associations of objects with an emphasis on process and material experimentation. Dickie's studio - the site of accumulation - will become a practice space and the gallery a resting place for objects on the verge of transposition.

An accompanying publication of drawings, studio fragments and installation documentation will be made available.

Georgia Dickie is a Toronto-based sculptor who addresses the complexities of contemporary object-based practice. Relying heavily on chance, her work is characterized by a deep interest in found materials and their inherent limitations. She received her BFA from the Ontario College of Art and Design in 2011, and her work has been included in a number of group shows including Shore for Shore, Alexandria, Egypt, Chopped and Screwed MKG127, Toronto, Bless this Mess Deleon White Gallery, Toronto and Bitch Slap at Thrush Holmes Empire, Toronto.